She was at the Clark Art Institute, in the Lunder Center up the hill from the main buildings. I drove there early one Thursday morning and found myself virtually alone with the painting. Aside from a related print tucked away off to the side, the painting of Whistler’s mother hung in the center of a room, by itself. Having never seen it in person, the silence of this unexpectedly large painting was unpredictably powerful. Its muted colors richly engaging. Often, because of over exposure through reproductions and the media, iconic imagery such as this doesn’t hold up to in-person analysis, this one did. And as with all great art its power was inexplicable. The painting didn’t need explanatory text or supplemental works; it was visually self-sufficient, a comprehensive exhibition unto itself. However the Clark did add a room of his prints, plus an additional space that connected the painting to reductive modernism and the grid. The latter room contained a quote from the grid apologist and sequential thinker, Alfred Barr. He believed Whistler’s painting was a modernist forbearer, complete with an underlying grid. A wall placard with text, images and an analytical diagram explained this. 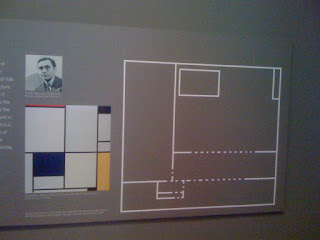 “This guy sees the grid everywhere” was my first thought.


And then I turned around to see this: 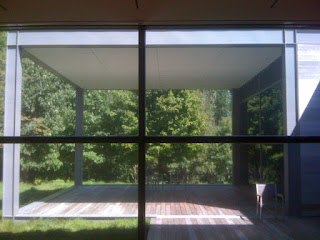 And my thought changed to: “I guess it is”.

I decided to hike further up the hill to see Thomas Schutte’s minimalist geode. At the end of a trail, perched on a hilltop high, with a view of the Clark, Crystal pays tribute to minimalism while adding touches of architectural function. Shape-wise it is similar to Tony Smith’s Tau, albeit with overlapping cladding. 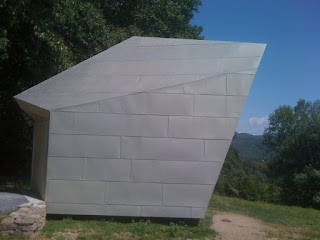 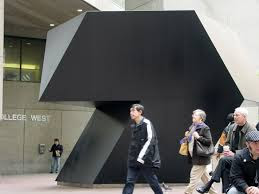 Tau
And by adding a door to one side and an opening with a view of the landscape to the other, Schutte alludes to the fact that Tau is a hollow form. And in Crystal he literally mined the void within a minimalist sculpture to create a hybrid sculpture/shed. 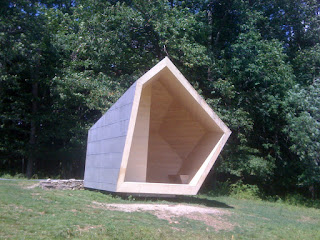 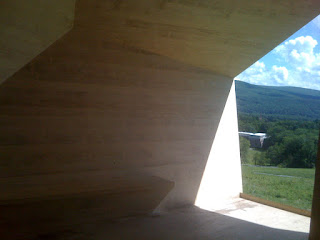 A built-in bench allowed me a respite and moments of quiet contemplation after the somewhat steep climb to the site.
That was until the crowd from the Clark’s Van Gogh exhibition found its way up the hill. The Clark, having recently expanded for a third and perhaps final time, is now a blockbuster venue. 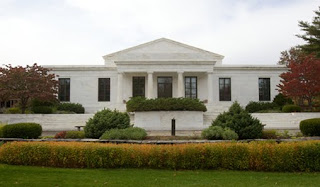 I fondly remember the Clark’s original neoclassical-style marble building as a smallish temple for art containing intimate spaces for Impressionist works and assorted antiquities. A 1970’s addition grafted a darkish granite volume to its southern side, creating a new entrance, parking, a library and more exhibition space.
Recently Tadao Ando was called upon to create the final architectural additions to the Clark Campus. Along with Reed Hilderbrand’s new reflecting pool and landscape design it truly is a campus now. There is acreage. Pastoral hills, trails, trees and pastures. The original building can’t be seen as one walks toward the new entrance. A long wall, leading to Ando’s new 42,600 square foot Clark Center, hides it from view. Given that, like Tanglewood, the Clark has historically always had an older clientele, it is a long walk from the lot to the entrance. Thankfully there is a restroom and water fountain halfway along the wall to relieve one’s bladder and refresh oneself. 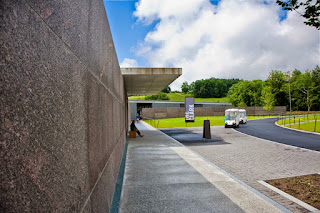 The wall, acting as a blinder, forces visitors to focus on the new and downplays the old. I was there to see the Van Gogh show and because the museum had not yet opened visitors were allowed to wait by the reflecting pool and comfortably admire the landscape on a sunny, summer morning. However from this vantage point the rear of the original building was noticeable. Which, in and of itself, wasn’t a problem but that dark granite addition could also be seen, and it simply looked sad. One couldn’t help thinking, “Is that staying there”?
It’s clear that Ando did not want visitors to see the other buildings while approaching his Clark Center. He controlled the view with the wall. However once inside the campus there exists a discomfort between the buildings. Perhaps that’s why his Lunder Center was placed in the woods, up the hill, high away from the other buildings. The surrounding trees isolate it and screen out any view of the conflicting architectural battle below.

With a few more cultural additions to North Adams and Williamstown, by mid-century one might be able to enter through the front door of MassMoca, continue through a series of contiguous museums, and exit through the rear door of the Clark.
MassMoca; the proposed Museum of Extreme Model Railroading and Contemporary Architecture; the proposed Contemporary Museum at the North Adams airport; the Williams College Art Museum and the Clark in Williamstown, have all either expanded, are expanding, considering expansion, or exist on the drawing board looking for financing.
Earlier this century I wrote about the Cultural Corridor between Beacon, NY and Bennington, VT. That Corridor slowly evolved over several decades starting in the late fifties and early sixties. The migration of artists between the New York City region and southern Vermont area triggered the growth of cultural institutions along this north-south Corridor. Now a mini east-west Corridor will link the former mill town of North Adams and the venerable college town of Williamstown, with the aforementioned museums spearheading this process of acculturation.