A Stroll Down Park Avenue and the Erasure of Josef Albers

A Stroll Down Park Avenue.
This semester my Intro to Art class has followed the Richard Prince case and debated the whole idea of artists using other people’s images in their work. Conveniently, both Richard Prince and Andy Warhol have shows up. First we went to see the Warhol paintings of Jackie Kennedy at Blain/DiDonna. The students felt that through the silkscreen process Warhol had transformed the images he worked with, and was therefore justified in using them. With Prince (across the avenue at Gagosian) they were less than enthusiastic and simply didn’t think the work merited any attention. We went over ideas related to appropriation and context but they feigned a total lack of interest. I told them that with a couple more years of art school they’d be on board. They doubted it.

In the same Gagosian location there is an interesting selection of Ed Ruscha paintings on view and while there I was reminded that there’s a new Gagosian space on 75th & Park Ave. It’s called Park & 75 and has an Urs Fischer show. That guy has been busy. I don’t always pay a lot of attention to the artist-as-provocateur pack, but he seems to be the leader of it (of course Sarah Lucas, and others, might dispute that).
Working ideas that most artists have had or have, Fischer torques them and pushes them to extremes while using a blatant “in your face” approach (the hole in the gallery floor, the melting figures, the reproduction of the wall placed on the wall being reproduced, etc.). At Park 75 he has a large piece. It’s a cast metal sculpture that was made from a collaborative process with a whole lot of people (kids included).
It’s a roughly modeled send up of the Last Supper where the figures eat hot dogs, drink beer, grab each others’ asses and, in general, engage in horseplay and convivial debauchery. Gotta love his energy and free spirit. Maybe. 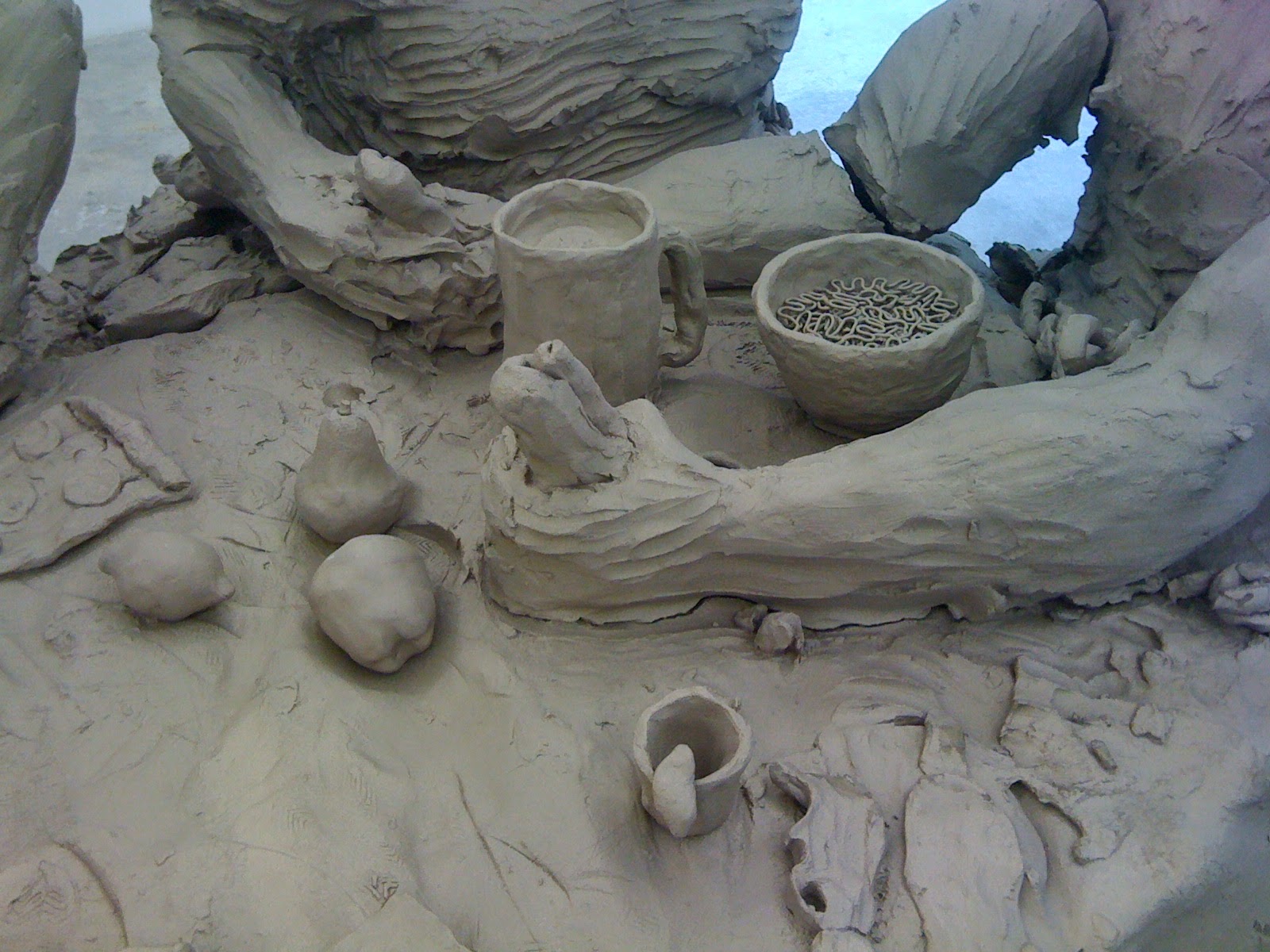 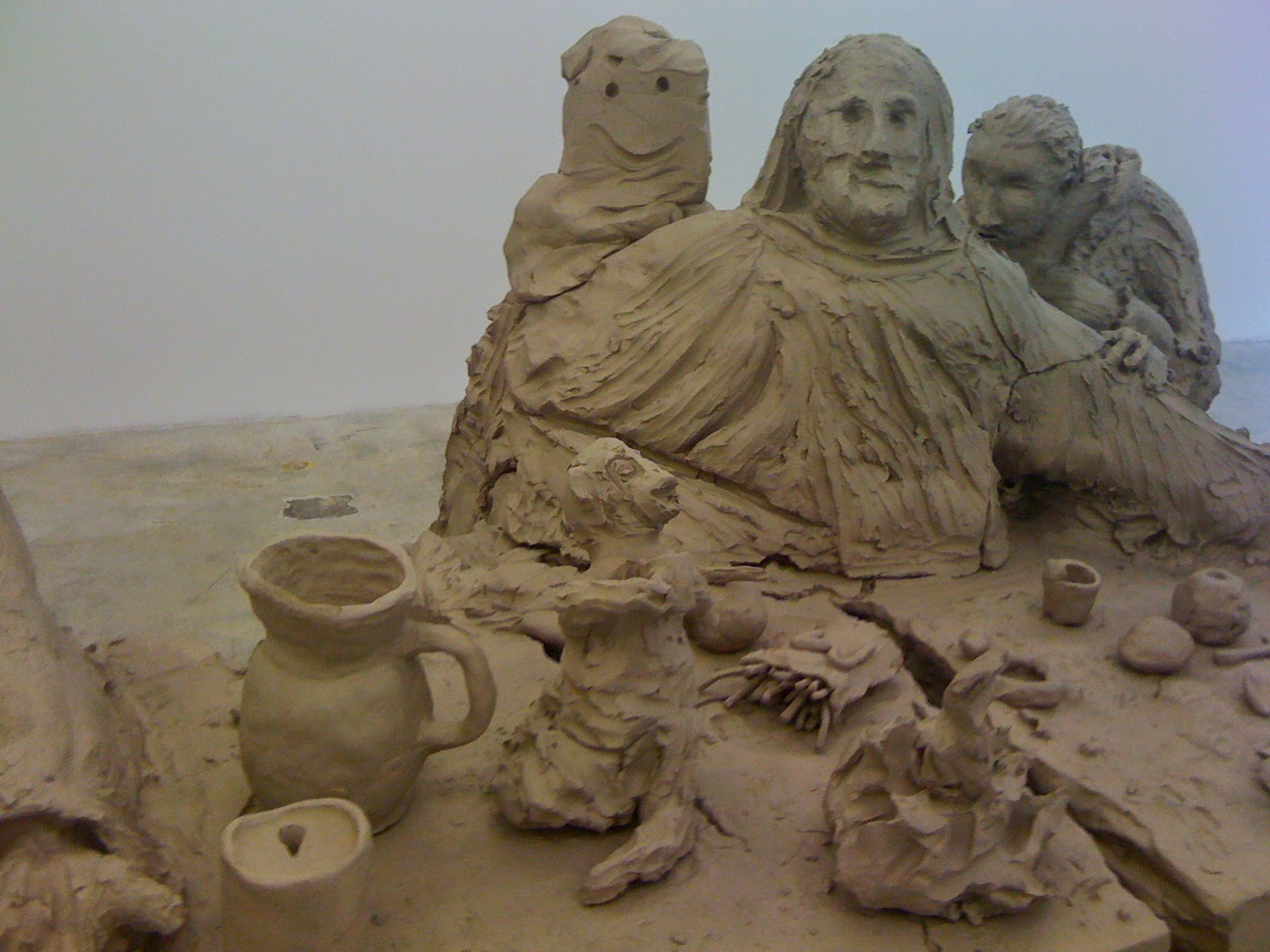 Walking south down Park Ave I came upon a series of Alice Aycock sculptures. When I was a student and she was an emerging artist I followed her work and that of her contemporaries: Charles Simonds, Mary Miss, George Trakis, Gordon Matta-Clark, etc. They were the generation that came after the Earthworks artists, but they didn’t need to go way out into the desert with bulldozers and dump trucks to make their work. They could simply go to the end of a parking lot with string and wooden stakes and make a piece. They could go up to the Bronx with a chainsaw and cut out shapes in abandoned buildings, or walk around the lower eastside with a bag of wet clay and pre-made miniature bricks improvising cliff dwellings on the craggily surfaces of dilapidated buildings. They could make work in Jersey that mattered. That was when an alternative scene had emerged that was equal but different then the gallery world, or so it seemed at the time. Aycock’s aluminum swirls on Park Ave are a world away from those days. 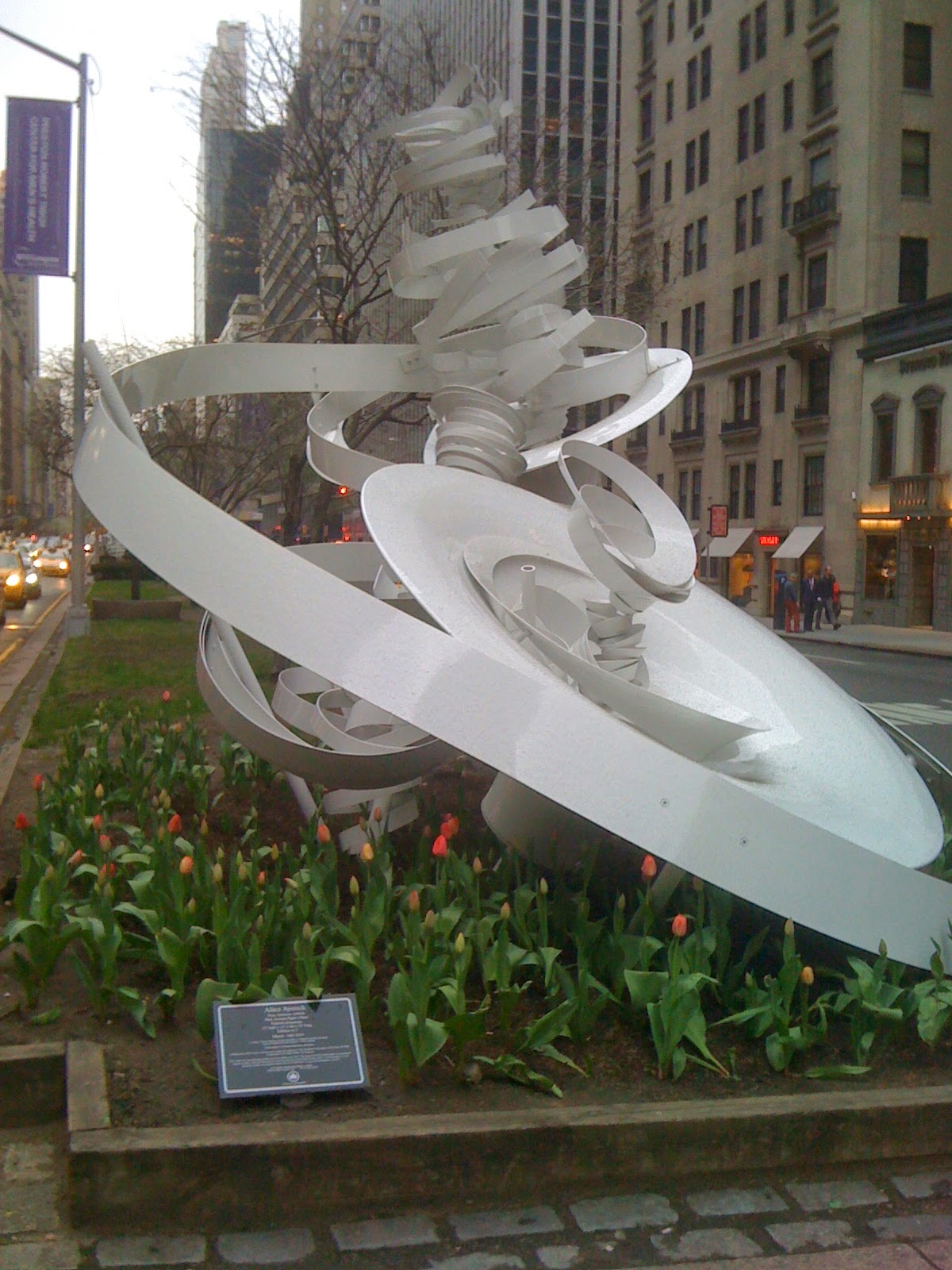 Continuing south, on the way to another Warhol show, I discovered another Fischer show. That guy seems to be at a point in his career where he has the ability to make anything he can think up. In the Lever Building he has mirrored boxes with printed images of objects on them. A kind of Pop Art/Minimal Art fusion. Didn’t Warhol do that? 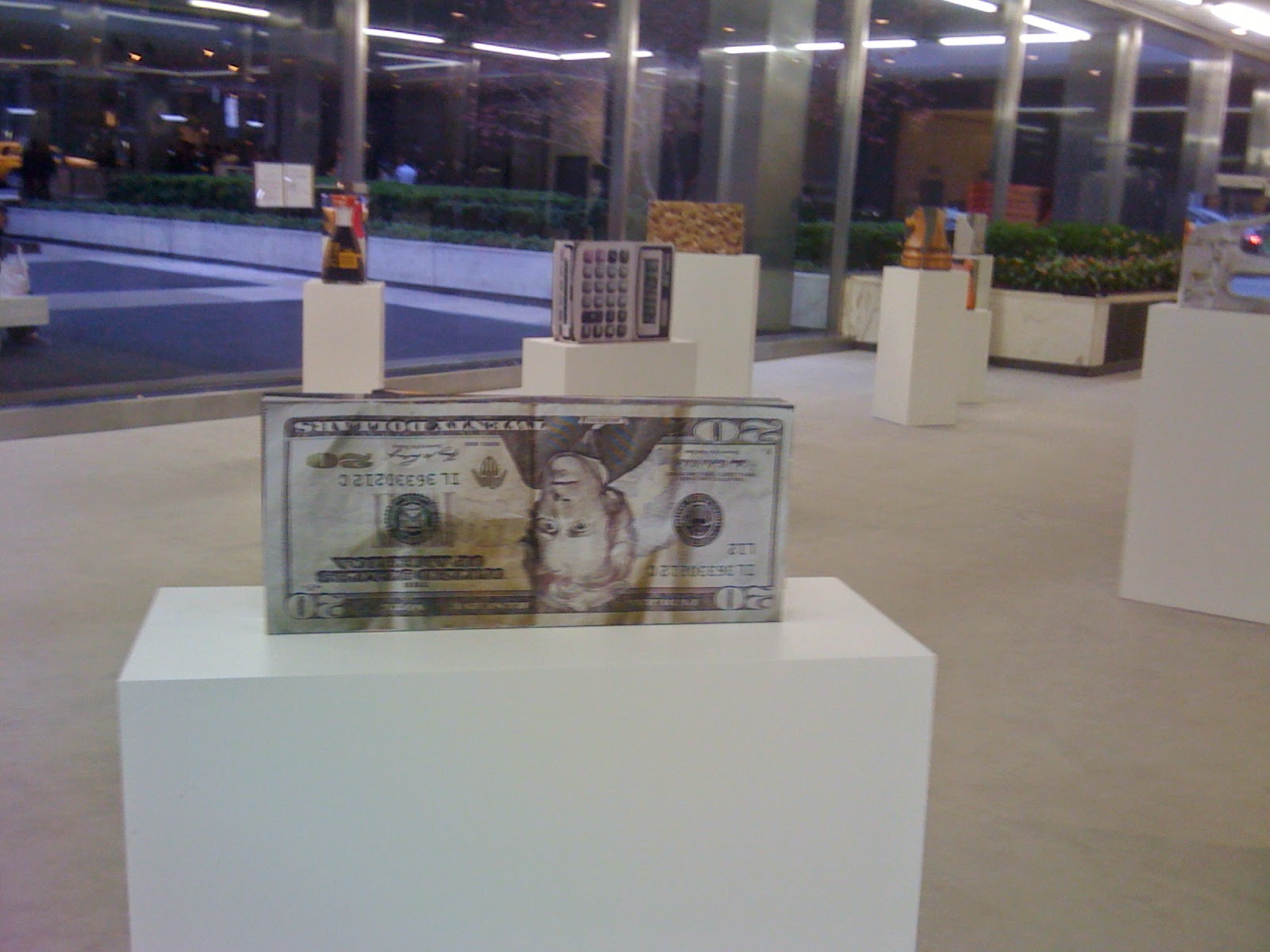 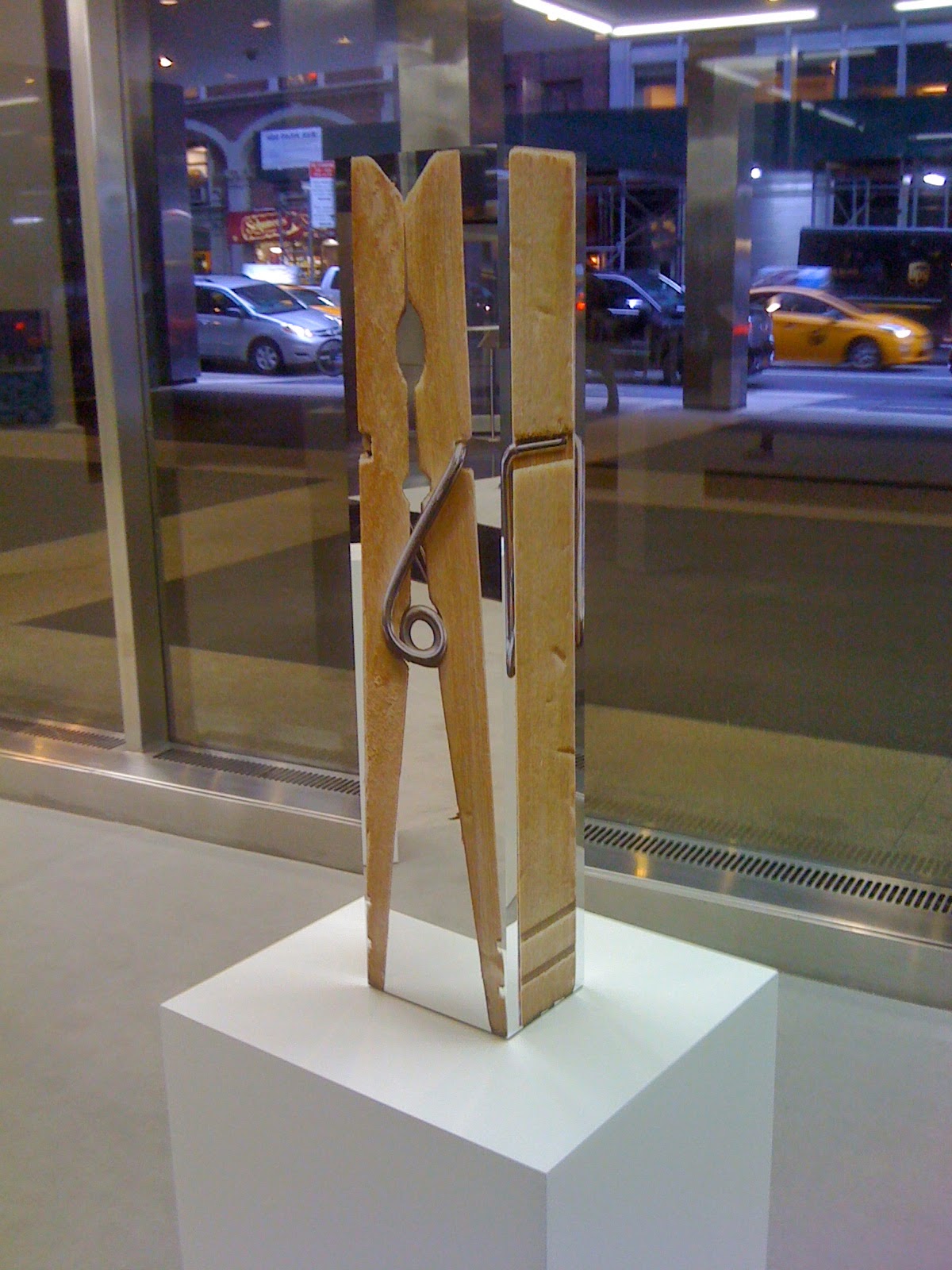 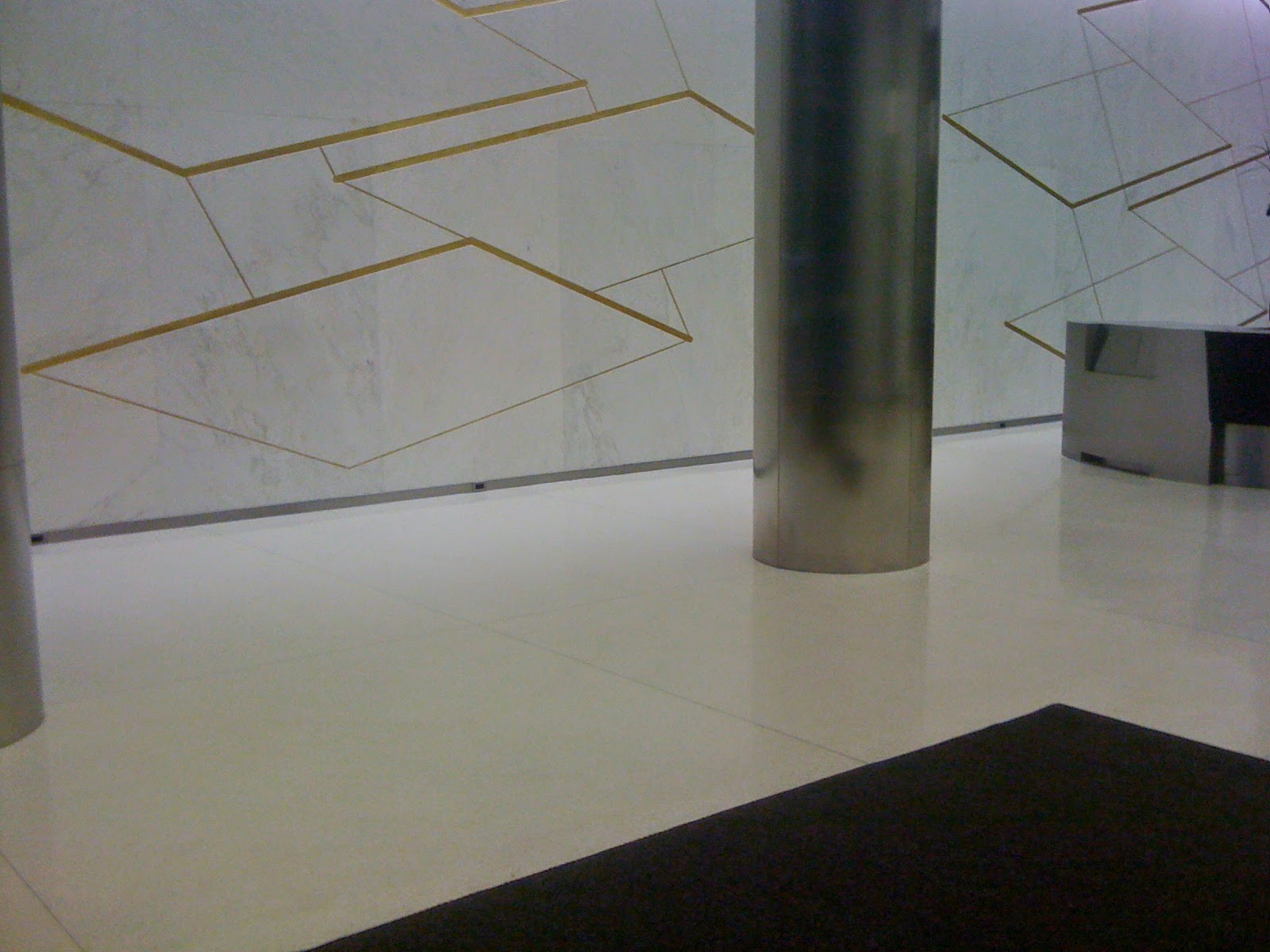 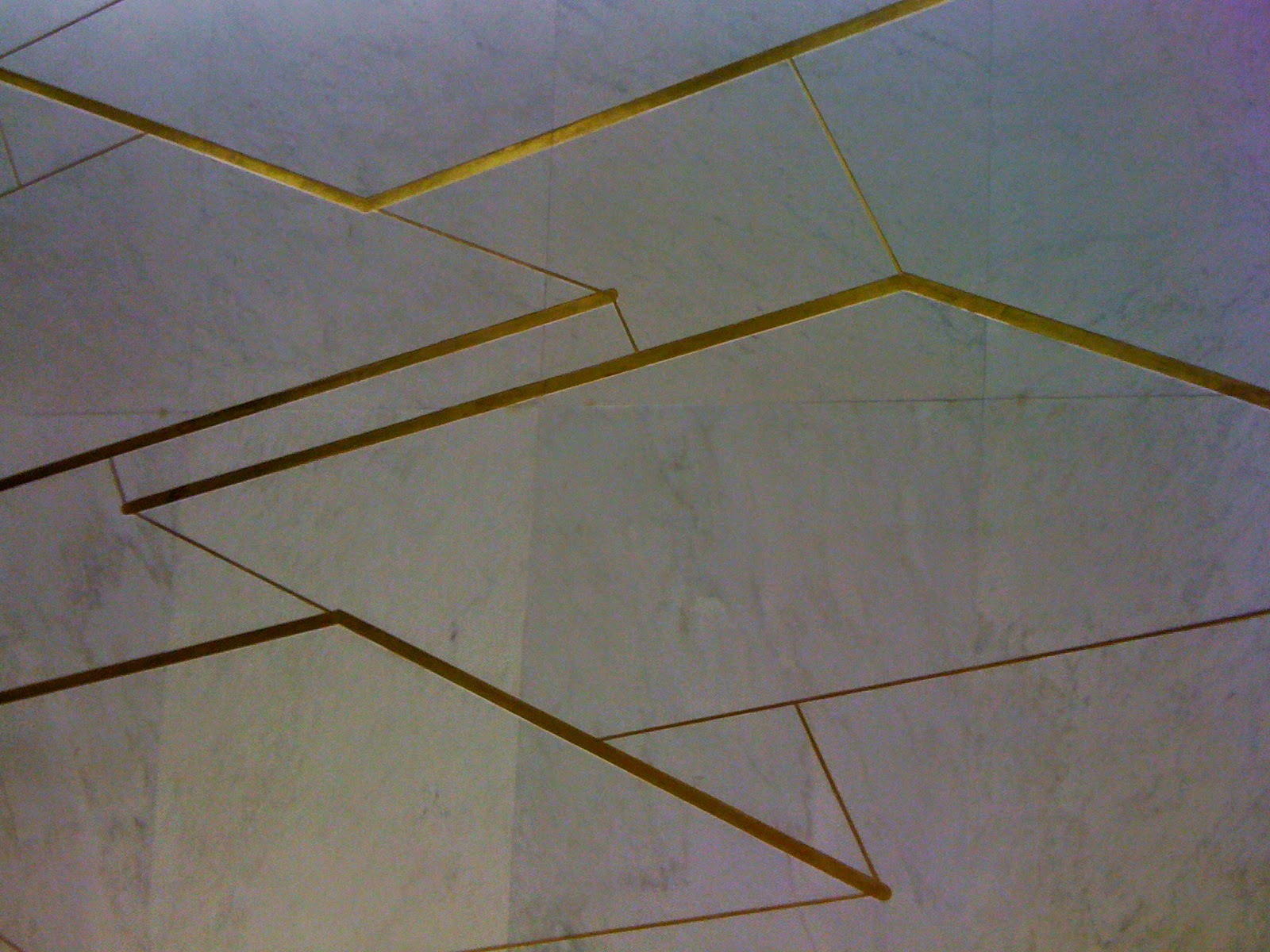 The Warhol portraits are minor (though Tatum O’Neal is cute) but the Albers mural is a major work. Restored in the early 90’s with real gold leaf (the original used a cheaper substitute) it is one of only two that remain in midtown. The other one is in the Time-Life Building.
At one time Albers had four murals in midtown. Perhaps his most prominent, but often unnoticed, was in the old Pan Am building (now the Met Life building). Tightly installed over the escalators that descended into Grand Central, it was taken down when they redid the lobby in 2001.
His most visible mural was in another building on 6th Ave. It was a large drawing done with red & white tile that was visible from the street. But that was also lost to a lobby redo.

Posted by Peter Dudek at 3:22 PM No comments:

Relationships, Rituals, Addictions and Other Musings

During my first semester in NY I lived in a shabby hotel in Brooklyn Heights (the one where Travis Bickel bought a gun in Taxi Driver). I kept a hammer near my bed. Every morning at 3am my neighbor would blast a religious radio station. I’d bang on the baseboard a few times and he’d turn it down. It was a working relationship.
At the time I was a student at the School of Visual Arts. On Thursdays I’d walk across the Brooklyn Bridge into Manhattan, eat lunch in Chinatown, see galleries in SoHo and arrive at SVA in time for my 4pm class with Carter Ratcliff. It was a ritual.
Carter was a quiet, low talker kind of guy so I always made sure to sit in the front row. One day I fell asleep in class, head on desk. I awoke to find Carter pacing back and forth across the room, seemly holding a conversation with himself. Embarrassed, I groggily turned around to check on my classmates. All were sound asleep, heads firmly planted on their desks. Carter kept on talking, pacing back and forth.
In those days a classroom full of sleeping students might have been the ultimate nightmare for instructors, especially in a small classroom. Now it’s texting. No one sleeps anymore, they’re too busy texting. It’s an addiction.

Sometimes I teach in a classroom, sometimes a sculpture studio. The studio can be abuzz with materials being cut, noise levels high, yet students, standing near a band saw, or dangerously close to some other tool actively being used, will be texting, oblivious to their surroundings. Safety anyone?
In classrooms students are often texting as a discussion is in progress. What goes on here? Is this the new abnormal? Not long ago there seemed to be a concern about attention deficit, now it’s attention elsewhere.
In casual conversations with other instructors they all reported similar experiences. I eventually decided I had to tell students that I was considering counting texting in class as being absent. Remarkably everyone said that it would be a fair thing to do and acknowledged that if someone is texting, then clearly that person is not present and therefore absent. What? Were they admitting to their addiction? Was this a cry for help?

This semester I’m teaching at Haverford College. No texting issues there. It was formed by Quakers and has an honor system that students abide by. Somehow cell phones don’t rule their classroom lives. It’s true, miracles do happen.
Through Haverford’s Distinguished Visitors Program, I was able to invite the architect Jonathan Kirschenfeld to visit the campus and talk about his work in designing “supportive housing” and why he founded The Institute for Public Architecture. http://instituteforpublicarchitecture.org/ 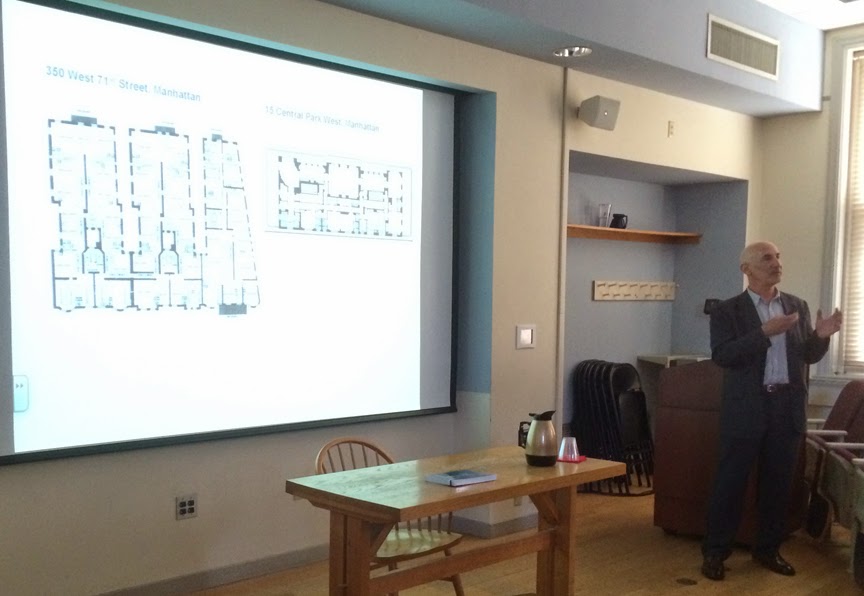 Jonathan gave a great overview of the history behind “supportive housing”, his work, and the efforts of the IPA. It’s a multi-purpose think tank, residency program for architects that advocates for new approaches to public housing. The IPA organized the recent event: “Roundtable: A Total reset for Public Housing”. Check it out.


Other musings:
Although Film Forum provides consistently great programming it’s not really a great place to see films. Small, tightly fit seats with no legroom in narrow quarters and small screens. It has the unfortunate feel of a miniature 1980’s multiplex. I went there recently to see Jodorowsky’s Dune, a colorful and fascinating documentary of his efforts to make a movie about Frank Herbert’s book Dune. Although he failed to make the film, his well-known efforts to do so influenced many future sci-fi films. 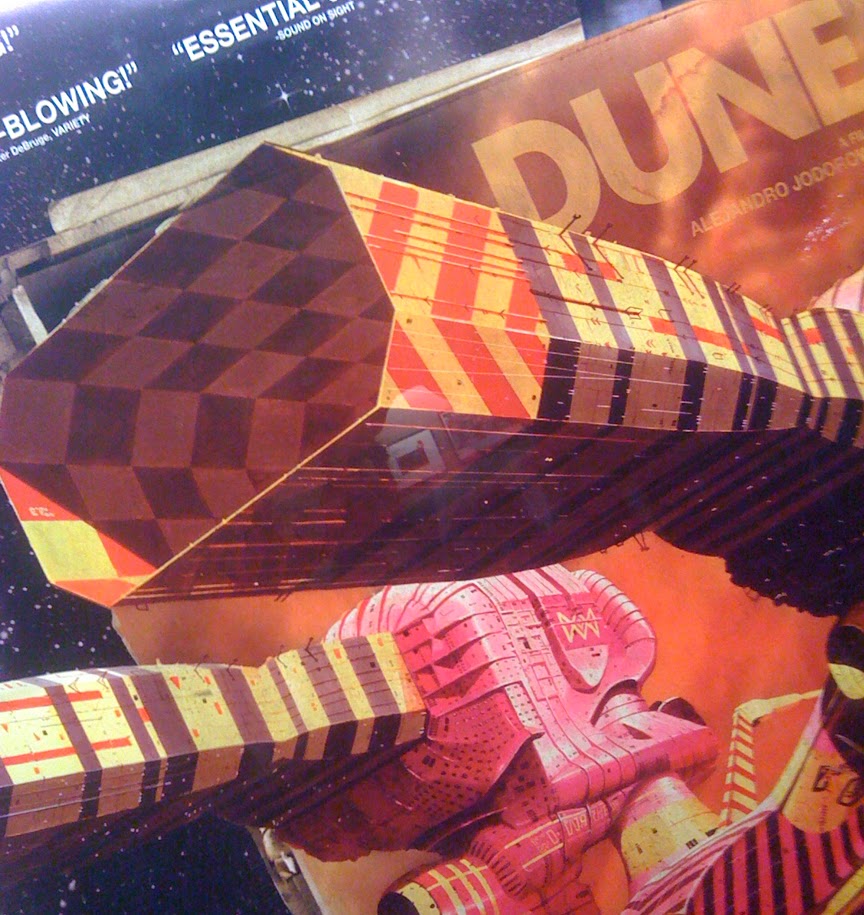 Throughout the documentary Jodorowsky is shown to be a man of passion. Conceptually he envisioned his approach to filming Dune as “raping Frank Herbert, but…with love”.
Yes, he’s a man of passion.


Ida, a great Polish film I wrote about in a previous post, will be playing at Film Forum in May. It’s a starkly beautiful film in which black & white cinematography, austere means and extraordinary acting combine to confront a dark and difficult subject matter. As with most Polish films, no happy ending required. Can’t get any better.


Upstate Alert!
I’m putting together a survey exhibition of drawings and paintings by Susan Hartung. In the fall it’ll be at Hudson Valley Community College in Troy, NY. Spread the word.


PS. The Corcoran Gallery of Art in Washington, D.C. is closing and dispersing their collection.
How about remaking the building into a factory or mill, thereby reversing the trend of turning former industrial spaces into museums?